The basic premise of Kara the Aquatic (the next arc in Kara the Brave) is this:

That’s literally it so far. XD

I’m trying to avoid another quest object based storyline, but I keep coming up with those, so I haven’t gotten much farther in that area. So far, I have a mental image of an underwater temple covered in strange and beautiful writing that Kara will explore somehow. The creatures involved will be this seal thing, highly expressive things I call squishies, and possibly a ghost-type thing.

The snake thing above might be part of the temple adornments.

From left to right: the stages of squishy movement. Think jellyfish, but cute and without tentacles. Then the seal thing with three pairs of flippers because why not. Followed by experimenting with various squishy expressions.

The idea for the squishies is that they don’t talk. They just emote. Thus the need for a wide variety of emotingness. 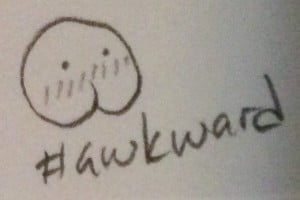 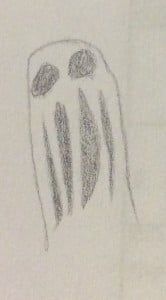 Feel free the use the awkward squishy for things, so long as you attribute me. Because it’s hilarious and totally worth sharing. The ghoulish thing to its right is the ghost thing that might appear in the comic. Not sure yet, but I’m warming up to the idea. Yes, I want squishies to purr. Or vibrate in happiness, which is practically the same thing. It may or may not make it into the comic, but it’s hilarious enough that I’m strongly considering keeping it.

Some mouth-only expressions I’m playing around with and how they relate to each other. Squishies just have eyes, so this won’t be for them, but I’ve considered using this for another creature in this arc, or just as a reference for this and later arcs.

The challenges I’ll be facing in creating Kara the Aquatic are as follows:

Kara the Brave was SO MUCH fun. I started it without knowing how it would end, and did a lot of planning on the fly. Which worked really well for that but, this time around, I want to be a little more methodical about this and use a development process similar to what professional graphic novel creators do. Like being purposeful about setting, character design, and storyline.

Above all, though, it’s got to be fun.

See you in the new year with more about Kara the Aquatic as it develops!

We’re almost at the end of Kara’s adventure! As the title says, there’s only three strips left and, as a result, you’ll be able to read all of them next week, on Tuesday, Thursday (!), and Friday.

In addition, on Friday next week, you’ll get another post, this time with a look into what the next of Kara’s adventures will be, including some really cute sketches of underwater creatures called squishies. :)

See you next week!

The situation is exactly how it sounds in the title. I’m taking a TESL course (Teaching English as a Second Language), and I’m horribly behind on readings and the not-for-marks-but-still-very-important homework. Today, I was sure I could still put up new strips this week, but it’s becoming increasingly apparent that that’s simply not possible in a way that’s healthy for me.

Which sucks, because I’ve been enjoying drawing two strips a week, and because we’re getting so close to the end of this arc. But I’m not about overwork myself. You’d get crappy comic strips if I did. :P

I’ll tell you how many strips there are left, though. Approximately speaking, there are 5-7 left. How many exactly depends on if I find I really do need to add 1-2 strips to the ones I’ve already planned.

That said, whichever number it is, I can promise this: the last week of this arc will have more than two strips. Because of reasons.

More details to come when I have exact numbers nailed down. Keep an eye out. :D

This year’s Expo First Look is Kara and the Dragon, which is a prequel to Kara the Brave. This is the cover: 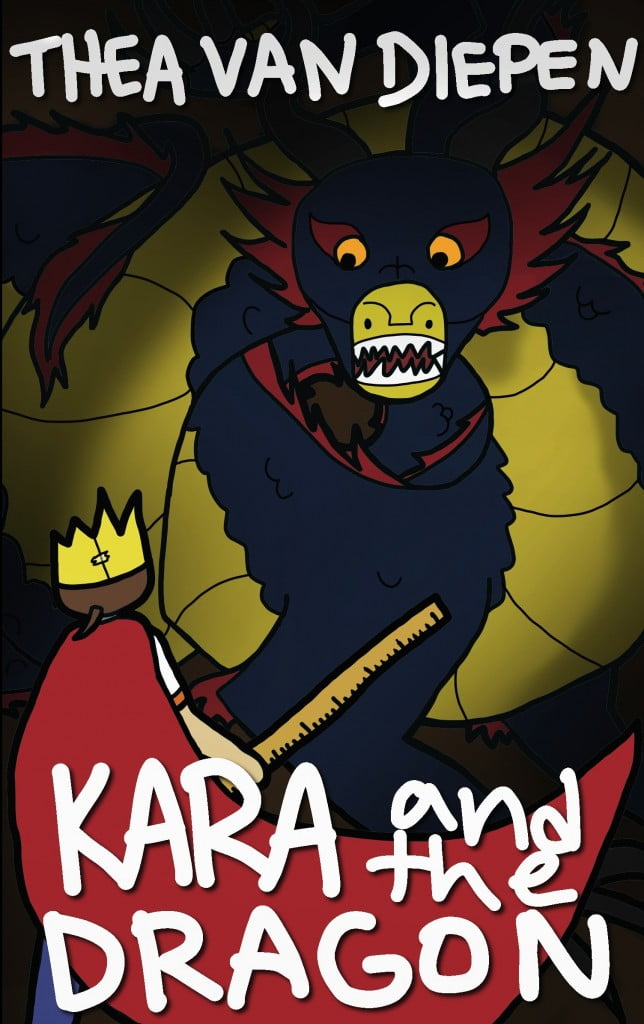 Come by my booth (C3) to get a postcard with the download link. :)

My next book, Hidden in Sealskin, came back from the editor two hours ago, which means it’s go time again for editing, as I’m racing against the clock to get this book published before the Edmonton Expo (more on the Expo in a sec).

As a result, the schedule for Kara the Brave will be a bit wonky for the month of September, something which I plan on making up for come October.

After September won’t be so weird:

Once this arc of Kara’s adventures is done, I’ll take a break until January in order to work on some other projects, finish a TESOL course (!!!) and plan the next arc.

As this happens, I’ll share snippets and sketches of these plans. Since I made up all the characters in this arc by doodling during class, there will also be lots of little doodles. The best place to be following this along (along with everything else I do) will be on Patreon.

Speaking of the Expo…

Yes, I’ll be at the Edmonton Expo again this year, and this time I’ll have my own table! Along with my books, there will also be some Kara the Brave pins, although they weren’t very popular last year, so there won’t be any new ones. More on that in a sec.

*Please note that this number has been changed two or three times since my exhibitor application was first accepted, so this might change between now and when I set up. Please do check on Sept 25th before you come to make sure it’s correct. :)

ALL of the Pins

At last year’s Expo, I had a number of pins made for Kara the Brave. Like I said, they weren’t all that popular. Since the designs were made from only what I thought was funny or cool and I didn’t get input from you, this was something I figured might happen.

So this is my question for you:

What would be on your Kara the Brave pins?

And, if you want more or prefer something else:

What kind of Kara the Brave thing would you like to own?

Kara will be taking a quick break this coming week to sleep, and will also be off on vacation for the 4th and 11th of August. There is also a slight possibility of a small nap between these weeks, on the 28th of this month, but that depends on how things go. Let’s just say for now that, if a strip shows up, it shows up. And if it doesn’t, then vacation will be over soon enough and Kara’s adventures will return on the 18th as we enter into the final chapter.

Did I mention before that this, Chapter 3, is the last chapter of this arc? Because it is. I wonder how Kara’s going to deal with the dragon and complete her quest… :D

There is now a new reward on my Patreon, whereby patrons who pledge $3 or more will get each new Kara the Brave strip a day early! Seems like a nice way to brighten up Mondays. :)

Kara the Brave will continue to update once a week but now, instead of Saturday (or Saturdayish), it will now be updating every Tuesday!

Also, I now have a Patreon page which means that, if you want to be directly involved in supporting this comic and the ongoing adventures of Kara, then that’s where you can do it!

Once the last few details are worked out, I’ll be adding a new reward, too: one where you’ll get the latest strips every Monday. So, a day early! That’ll be ready either next week or the week after, and I can tell you that, if you pledge $5 or more, you’ll definitely get this.

See you on Patreon!

It’s been a bit of a rocky schedule since Kara officially returned from hiatus, but the weekly posts are, in fact, back in business. :D In addition to that, I now know how this story arc ends!

Which isn’t to say that it’s going to be ending all that soon, mind you. There’s still a few twists and turns to go yet and a dragon to deal with, after all.

You may have also noticed that I know how this story arc ends. Which is as much to say as there will be more to come. How much more? Well. That would be spoilers, now wouldn’t it? :)

Until then, be assured that there is an ending planned, the story is heading towards it, and you will find out what happens all in good time. :)

I’ve been hemming and hawing about this for a while now about this, but I’ve decided now. Instead of constantly postponing strips one day or one week as I try to manage the workload of the last semester of my degree, it’s best to put Kara the Brave on pause until that’s all over. I tried not to, but the only other thing in my schedule that could be removed to give me the time I need to post consistently can’t be removed without certain other things in place. And those things aren’t in place.

My last paper is due on April 15th, and I might go to the Calgary Expo that weekend (not with a booth, just as an attendee, as I’ve never gone before), but I have to work out some details first. So, to leave room for that (and some time to celebrate finishing my degree), the hiatus will end the weekend after that. Um. *checks calendar* Right. That’ll be the weekend of the 25th.

So, mark your calendar, set a phone alert, do whatever will remind you the day of what happens next in Kara’s story. And see you on April 25th. :)